Should I get one or two dogs? 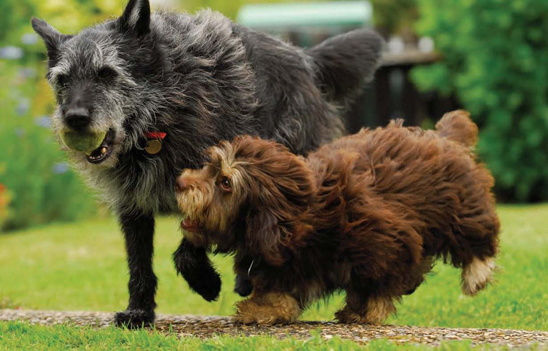 Want to bring a second dog into your home? Then you need to consider the impact on your current pet, explains Jackie Drakeford.

‘If one is good, two will be even better. If we get a second dog, they can be company for each other. They will be friends. That dog with separation anxiety will become calm. The elderly dog will adore a new puppy.’

So many owners think this way when bringing another dog home. They then get a nasty shock when the second dog is actually home, and the first dog isn’t falling in with their ideas. Imagine your partner coming home with another person and telling you that because it’s been so much fun living with you, they have brought home a friend for you, and you can have fun together — that’s how your dog feels.

For most dogs, another canine is not a little pal, but competition for everything they hold dear. Even the most sociable dog when out on walks can find another dog in the home really disquieting. A dog who accepts canine visitors cheerfully can also heave a silent sigh of relief when they go home again, but what if that other dog doesn’t go?

A dog for you

It isn’t wrong to have another dog, but neither is it essential, so ignore those people who tell you that your dog is lonely, that he would love a little playmate, and that dogs are pack animals and it’s wrong to have just one. The second dog is for you, not for your dog. Once you admit this, you can commit to making the transition from a one-dog household as painless as possible for your original dog.

From a behavioural point of view, it is better for a second pet to be as different as possible from the first. This is because different types of dogs fi nd different resources important. A toy-orientated dog kept with a scent-orientated dog will have little reason to compete, but two toy-orientated dogs may find toys worth fighting over, no matter how many toys there are.

A male dog will generally be happier with a bitch; two boys can live harmoniously, but it is a lot of work to keep a household of bitches calm (speaking as someone who has kept five bitches and one male dog together). Of course, opposite genders mean either one or both must be neutered (not everyone realises that castrated males can still mate and tie, and there is risk of injury if they do) or else committing to separating them when the bitch is on heat. Neutering will not solve behavioural issues or conflicts either, for gender bias still remains.

Look at the original task of the breed you already have, and pick a new dog whose task is different — a gun dog and a herding dog, for instance — then they won’t be disputing over the same activities. That’s the ideal, but most people prefer a particular type of dog, and quite a few prefer one gender and size. Given that the second dog is for them, people often want the kind of dog that they love (and why not?) so they have to work a little harder.

Your house layout might need to be adapted to help your dogs get along. Allow for keeping dogs apart when necessary, feeding them separately, having more beds and water bowls than dogs, and, if possible, avoid having congested areas where one dog can feel trapped in a corner.

Puppies need feeding several times daily, and older dogs can resent this, so separate them at puppy mealtime, and give the older dog something to nibble too. This extra must come off his normal rations or you will end up with an overweight dog. Puppies can also be persistent in trying to get the other dog to interact; while some adult dogs enjoy this, others can’t be doing with it, so the older dog needs to be able to fi nd sanctuary away from the little pest. Though they may choose to share a bed at times, dogs like the option of relaxing alone when they need to.

You may take in an adult dog, and, if so, it’s a good idea to prepare by walking them together a few times before the new dog comes home. Do this with one handler per dog, and walk them parallel to each other with handlers in between, rather than expecting them to meet head-on, which is very confrontational in dog language. Once all seems tranquil, they can be allowed off-lead together.

This way, dogs can form a positive association with each other during the pleasant activity of taking exercise, (the thought of: ‘when I see that dog, we go for a walk’) rather than creating the challenge of one coming straight on to the other’s territory (‘exactly when is he going away again?’).

On occasion, dogs will take to each other right away, which is good in one sense but can mean anarchy if they team up and find that they can have more fun running off than obeying you. One might even teach the other the joys of destroying furniture or digging up the garden. So there is still work to do, and to begin with, the dogs each need to have plenty of one-to-one attention, with training and exercise, which of course means they are taking up more time not less.

Be sure that when one dog is getting attention, the other has some happy occupation such as a stuffed Kong, otherwise mild resentment could turn into antagonism. With separation anxiety — usually a need for a particular human rather than another dog — take care you don’t end up with two dogs who have separation anxiety, although more often the result is one distressed dog and one who is totally indifferent. However, neediness can make a dog seem weak, and a proportion of dogs will see this as a reason to bully the other one.

Other people can try to guilt you into taking on a dog that they no longer want, although you were perfectly happy with one. Your first loyalty is to your existing dog rather than solving a problem you didn’t create. Make sure you know exactly what the other dog is like, and the real reason for them parting with it.

Be suspicious of people who have to find a new home immediately, because caring dog owners plan ahead. Many owners have taken on a dog they didn’t really want, only to find shortly afterwards that the other family has a new dog.

The dynamics between two dogs can change in an instant, and you need to be aware of any subtle undercurrents. Keeping two can mean that they get on well, hate each other, are indifferent, or exist in a state of armed truce. You never know how events will pan out until the deed is done, but as long as you go in with your eyes open, make sure they have nothing to fall out over, read what the dogs are telling you, and allow them plenty of space and one-to-one time, you can make it work.

Use the search box to find the product you are looking for.

Posting....
Message Us on WhatsApp